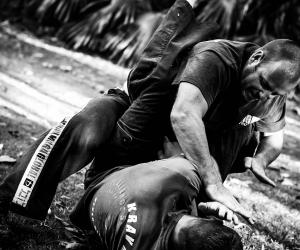 The recent development of strong ground fighting systems such as Brazilian Jiu Jitsu and MMA are having a massive impact. UFC has glorified tactics that ultimately leave you dangerously vulnerable to weapons and multiple attacks.

Size and strength really does matter if you choose to play this game. Police agencies recently noted that officers were experiencing high rates of permanent physical injury as a direct result of offenders training in Mixed Martial Arts and other ground fighting systems that focus on arm breaks, neck manipulation and shoulder/leg cranks.

In Krav Maga we train in defensive tactics on the ground, but in respect of other peoples ability, it is the last place we want to stay. This workshop is a crash course on the principles you need to escape and get up quickly when faced with likely grappling situations.

Importantly we will also explore the application of various attacks you are likely to experience while fighting on the ground and you will also have the opportunity to test your skills in a variety of simulations and drills.