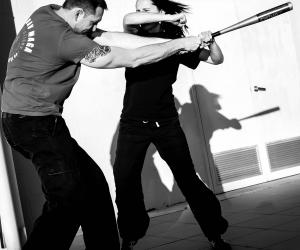 Three students and a lecturer have been injured in an attack by a baseball bat-wielding student in an Australian National University (ANU) classroom.

Police said an 18-year-old man stood up from his seat and assaulted the female lecturer at the front of the class with the bat.

Three other students were injured when they tried to intervene.

The man has been taken into custody and police said there was no ongoing threat to public safety.

Those at the scene have been comforting each other in the wake of the attack and the university is offering counselling.

“Other students in the class have intervened and have attempted to restrain the student with the baseball bat,” acting deputy chief police officer Ben Cartwright said.

“[It showed] incredible bravery on behalf of those students to protect the lecturer.”

He confirmed the man assaulted four people – one male student, two female students and the female lecturer – and said none had life-threatening injuries.

“They appear to be defensive injuries, we believe [there are] a couple of broken bones, a broken arm,” he said.

They were all taken to the Canberra Hospital.

What would you do?

What if your friend or loved one was getting attacked – would you know how to help them?

What about if there were a group of attackers?

If you did defend yourself and managed to get the weapon, what then?

Sticks, stones and various other objects (will break your bones) are often used to threaten or attack people every day. Bludgeon type objects are readily found in our environment so are an easy option for attackers.

Come along and run through a variety of realistic scenarios designed to give you an understanding on how to deal with these types of attacks in the real world.

We will advise when the next Workshop date is scheduled.