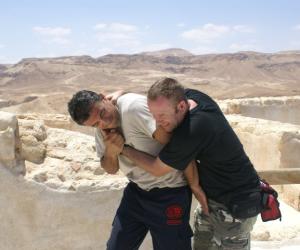 Alcohol, testosterone, jealousy and group mentality can turn even the most reasonable people into aggressive, violent and unreasonable attackers.

Most people have done some kind of martial art, and if not, alcohol gives them the one thing most martial arts can’t, the confidence (although often misguided) to have a crack.

The old saying “all fights end up on the ground” has never been so relevant as it is in todays fighting environment. BJJ and MMA (thanks to the Ultimate Fighting Championship) have tried to neutralise the stand up fighter by the use of sacrificial throws to take their opponents to the ground so they can finish with techniques like arm bars, carotid chokes, strangles and the good old ground and pound.

The kings of stand up like boxers, muay thai fighters and CQB exponents (just like the BJJ and MMA guys) have their own set of tactics to close the gap, encourage you to attack with a predictable first strike and set you up for their counters.

This workshop will explore various striking and set up methods of a number of different systems and then will teach you Krav Magas fighting tactics to overcome and neutralise those attacks including pre-emptive striking and initiation of your own counter offensive techniques.

Our instructors will take you through conditioning and fighting drills, exploring the ranges of attacks and getting off the ground fast. You will grapple, strike, fight and throw your way through 3 hours of intense fight training.