ARE YOUR STAFF PREPARED? AND I MEAN REALLY PREPARED? 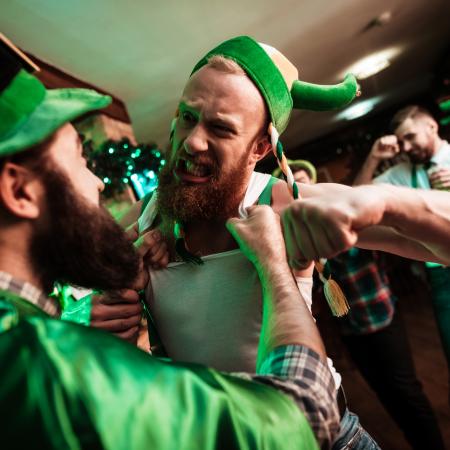 I was attacked at work!!
It wasn’t a dark and stormy night like all the best novels suggest…quite the contrary, an ordinary pleasant night by the water. A young group of rugby players attended a local restaurant that my security company was charged with protecting. They intended to have a good night out for dinner and a few drinks. It was St Patrick’s Day.
Unfortunately one of the young players insulted the wife of an ex golden glove champion in his 70’s who did what he knew best and started to punch the young player hard… really hard. The 70 year old didn’t know that he had 16 mates sitting outside but was about to understand what a multiple attack looked and felt like.
Security was called to attend (Police were already called) and as a result I decided to pop by the Manager and see how everything had unfolded. Unfortunately it looked like World War 3. Blood, broken bones, screaming and it was just getting started.
By this time the riot had moved outside where the bar staff were in a back and forward verbal assault of the rugby team, refusing to go back inside and lock the doors. These actions ignited round 2 which was far more violent than round 1 and I was caught right in the middle of the battle.
I got hurt, really hurt as did many of the staff. Upon the review process we noticed that three of the security personnel did nothing. They didn’t get hurt, they didn’t help, they just stood there, dumbfounded by the unfolding violence.
I don’t blame those guards for their inaction, it’s not their job to engage a group of young violent rugby players, and I’m sure they were incredibly conflicted by the reality of the job versus the training they had been provided. The Government approved training that teaches them to observe and report, which in the vast majority of cases within the security industry is insufficient and failing to prepare people for the reality of their role.
Staff in front line roles often find themselves in the middle of situations ignited by one of two reasons, someone else’s actions or words OR their own actions or words. Either way in the vast majority of cases the staff are simply not trained by their employer to mitigate or respond to acts of aggression or potential violence and the question is why? If an employer is going to demand that staff impose any type of perceived authority over the public population or deal with complaints whether they are security officers, emergency responders, fare collection officers, parking ticket officers, school teachers or carers then surely the employer must accept that its possible that those staff members might find themselves in vulnerable situations.
The last 25 years of providing security and personal safety services has shown three major barriers to organisations reluctance to provide training to staff to mitigate violence.
1. Organisational liability – all organisations are vicariously responsible for the actions of staff regardless of the type of training they provide. The question here is how liable is the organisation based on the training they provide? Failing to address the full spectrum of violence (ie. when the employee actually gets physically attacked) may leave your organisation heavily liable because your training only specifies, for example, how to remove themselves from the threat (usually cover and run).   What happens if leaving is physically not possible because the space is confined or the are being physically held by the aggressor during the assault. People have the right to defend themselves against violence. Usually untrained staff, while defending themselves, will and do, go way over the top leaving your organisation open to litigation. Training provides parameters and controls rouge employees by placing liability back on the individual.
2. Finances – operational need relates specifically to finances. It can cost a lot of money to train staff properly while maintaining normal operations. The question here is what is the cost of failing to provide training? One of our clients implemented violence mitigation training after a staff member illegally assaulted a member of the public. It cost them $600,000 in out of court settlements and $90,000 in costs associated with workers compensation.
3. Human beliefs – the number one reason for organisations failing to provide violence mitigation training relates to the fact that 90% of the civilised population believe one of two misconceptions. Violence doesn’t happen or It will never happen to me. It is this internal dialogue that sets the culture for the organisation and leaves everyone on the front line incredibly vulnerable.
There are huge benefits to providing your staff with violence mitigation training that significantly increases productivity and profitability while creating a culture that makes the employee feel that the employer will support them when things go wrong.
People in roles that deal with the public know that things can get out of hand, they have accepted that reality if they work in that role for a while and stay. The question is are you arming the people that represent your business with the tools they need to make your organisation look professional under difficult circumstances?
Ash Gard
Director
InDefence at Work
www.indefenceatwork.com.au